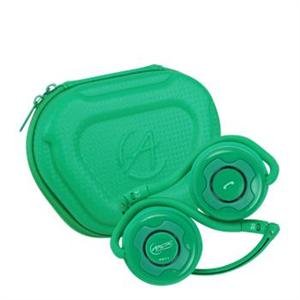 Equally Beautiful in Design and Function

The ARCTIC Sound P311 is a wireless headset to complement with virtually any electronic devices that support Bluetooth wireless technology, such as laptops, mobile phones or music players. The ARCTIC Sound P311 possesses clean hardware design, yet maintaining functionalities at the same time.

The ARCTIC Sound P311 is a well-made Bluetooth headset in terms of its design and function. Weighing only 71g, it is fairly small and compact – this makes it to be an ideal on the go companion. Since this is a Bluetooth wireless headset, it transfers audio signals over short distances. This means, it is compatible with laptops, mobile phones and music players that support Bluetooth.

The ARCTIC Sound P311 incorporates a one-size-fits-all headband. The soft pads and ear cup style offer great comfort and secure fit, even when doing sport. The good noise elimination ensures that you can truly enjoy your music. Its bendable arm allows users to easily fold and store the ARCTIC Sound P311 into the protective case that is included with purchase.

Compatible with Music Players and Mobile Phones
The design of the ARCTIC Sound P311 is also compatible with mobile phones, such as iPhone, Motorola, Nokia and Sony Ericsson. It has a built-in microphone on the headset. When there is an incoming call, the Inter-Call-Manager will play a ringtone into the headset. The music will then be paused and will resume after ending the call.
The right earphone is featured with five buttons. They help to answer a call, adjust the volume and forward/reverse the music. The mobile phone or the connected music player can just remain in your pocket. This gives you full freedom and access to all functions while still being flexible and hands-free at the same time.

Superb Sound Quality with Style
The ARCTIC Sound P311 not only comes with style and function, its superb sound quality is also another notable feature. It has a high fidelity driver that ensures uncompromised sound details and dynamics, including powerful bass and crisp highs. The headset features Bluetooth v2.1+EDR, in which it supports secure simple Bluetooth pairing. The connection status is indicated by a LED light on the headphone. Thanks to the Advanced Audio Distribution Profile (A2DP) technology, the ARCTIC Sound P311 can ensure clear and undistorted sound quality since it runs digitally. Distortion that was generated by alternating current that affected analog devices would no longer be an issue. Moreover, the headset incorporates Clear Voice Capture (CVC) technology, in which it has the ability to clearly extract and capture the user’s voice from a mixture of unwanted background noises. This immensely increases the quality when making calls. The ARCTIC Sound P311 is rechargeable via USB cable and can serve up to 20 hours of playback time.
All in all, the ARCTIC Sound P311 is a great Bluetooth headset. The ARCTIC Sound P311 headset contains dual-functionalities as headphone and headset for calls – this makes it ideal for people that use their phone to listen to music.